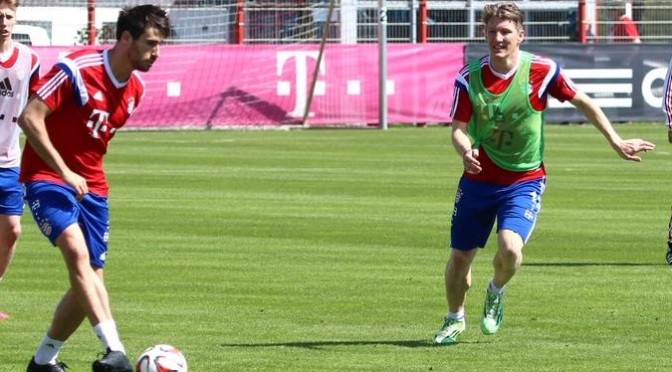 Having been a key part of Bayern’s 2013 Champions League-winning side, the 26-year-old had been sidelined since suffering the injury in his left knee during last August’s 2-0 German Super Cup defeat at Borussia Dortmund.

He underwent surgery in the USA before months of rehabilitation.

“It’s great news, I am really happy,” he told the club’s website.

“It’s just the first step, I know there is a lot of work ahead of me and I hope that I can soon get a few minutes of game time again.”

Martinez was in the stands to watch Bayern’s stunning 6-1 thrashing of Porto in Tuesday’s Champions League quarter-final, second-leg, when the Bavarians scored five goals in the opening 40 minutes to reach the last four.

He admitted he was touched when his team-mates included him in the celebrations after the final whistle in Munich.

“They applauded me and I believe everyone is happy to see me back in training,” he added.

With Bayern still bidding for the treble of Champions League, Bundesliga and German Cup titles, there is no date for Martinez’s return to playing.

With titles to be decided in the coming weeks, Bayern are also without injured wingers Franck Ribery and Arjen Robben, plus defenders Medhi Benatia and David Alaba.