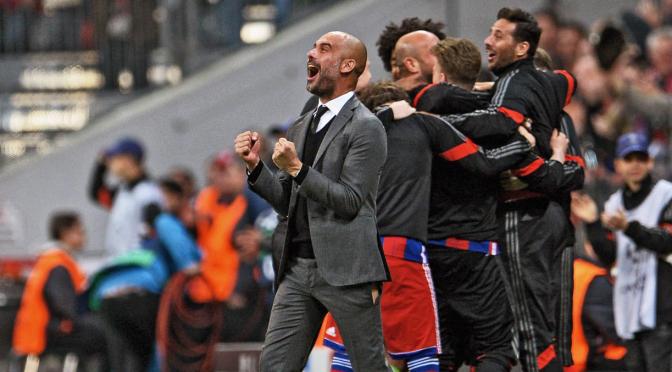 (Reuters) – Bayern Munich will not ease up after winning the Bundesliga title with four games to spare as they prepare to face Borussia Dortmund in the German Cup semi-final, coach Pep Guardiola said on Monday.

His team, chasing a treble of trophies, secured their 25th German league crown on Sunday, the second in a row under Guardiola.

The Spaniard said although last season’s triumph with 10 games to spare may have affected the team’s motivation, they had no time to enjoy this term’s victory with the game against Dortmund on Tuesday.

“We are extremely satisfied that we successfully defended our title,” Guardiola told reporters. “We will have time to celebrate but tomorrow we have a final against Dortmund.

“We are still in competition and the next match tomorrow is like a final. Of course we can lose but it is a completely different situation from last year. This year all the games are very close together.”

Bayern, looking to repeat their 2013 treble, face Barcelona in the Champions League semi-finals after crushing Porto 7-4 on aggregate in the quarter-final.

But they must first focus on last season’s runners-up Dortmund who are trying to salvage a European spot through the Cup after a bad league campaign.

“We have showed that we are hungry. We know how tough Dortmund will be,” said Guardiola, who had to juggle with a string of injuries in recent months.

Although some players are close to returning, including Arjen Robben and Javi Martinez, Guardiola will still be without winger Franck Ribery.

“We need Arjen but he has been injured for five weeks,” he said. “The level is now very high and we need fit players.”

Guardiola also said a decision on Bastian Schweinsteiger would be taken after the final training.

Schweinsteiger scored the winner in the 1-0 victory over Hertha Berlin that secured the title with an unassailable 15-point lead.

“I will decide tomorrow who will play,” Guardiola said.