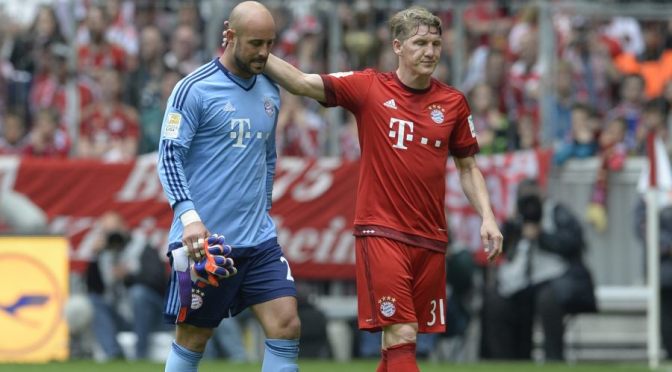 (Reuters) – Ten-man Bayern Munich slumped to a 1-0 home defeat by Augsburg in the Bundesliga on Saturday, a fourth straight loss which has hit confidence ahead of the Champions League semi-final second leg against Barcelona next week.

Borussia Moenchengladbach all but secured a first Champions League group stage spot by crushing fourth-placed Bayer Leverkusen 3-0, while Borussia Dortmund are eyeing a Europa League place after a 2-0 home victory over Hertha Berlin.

Struggling former champions VfB Stuttgart retain slender hopes of staying up after a 2-0 victory over Mainz 05 which keeps them in last place, but cut the distance to safety to just one point.

Bayern faced an uphill task once reserve keeper Pepe Reina felled Argentine striker Bobadilla in the box to get his marching orders after 14 minutes, forcing Manuel Neuer, who was being rested before Tuesday’s second leg with Barca, to come on.

Augsburg’s Raul Bobadilla flicked the ball home with a backheel in the 71st minute for their first ever win at the Allianz Arena as a weakened Bayern, already crowned champions, struggled with several changes to their starting lineup.

The Bavarians have now lost four games in a row, after defeats by Dortmund in the German Cup, Leverkusen in the league and Barcelona in the Champions League earlier this week.

“It was not easy after our game against Barcelona and playing 80 minutes or so with a player less,” coach Pep Guardiola told reporters. “Now we have to stay focused for Tuesday, control the game and see what we can happen.”

Guardiola decided to leave out some of his usual first-choice players, including Neuer, Xabi Alonso and Medhi Benatia, ahead of the Barca game following Bayern’s 3-0 defeat in Spain, but his plans were disrupted when Reina was dismissed.

However, Bayern substitute Neuer was not required to make a save from the resulting penalty — Paul Verhaegh’s powerful shot rattling the post.

Bayern’s Robert Lewandowski and Mario Goetze hit the woodwork earlier in the game but the home side ran out of steam as their passing game stuttered.

Bobadilla then scored after several second-half attempts, his audacious flick keeping Augsburg in fifth place and heading for a Europa League spot on 46 points with two games left.